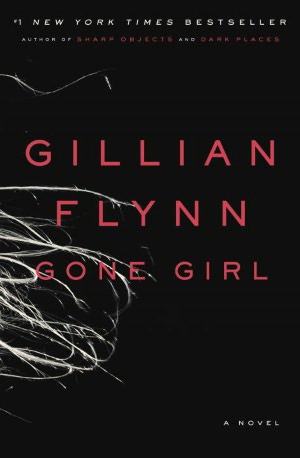 
I know, I know by now we've all read it, but for the few that haven't gotten hit by Gone Girl's intense marketing and publicity campaign, this is for you...

Gone Girl fell into my lap after my mom INSISTED I read it so we could talk about it. I was just about to go on vacation, in need of a fun read, and the cover didn’t have a shirtless dude with flowing hair in the embrace of a corset-clad damsel (hey, there’s nothing wrong with a good romance, just not for discussing with your mom) so I decided to give her recommendation a chance.

So if you haven’t already heard about the sensation that is Gone Girl by Gillian Flynn, it is a thriller, one that circles around the relationship of a young couple, Nick and Amy. Amy is a true Manhattanite, she’s brilliant, beautiful, and your typical fast-paced New Yorker. Nick is a sweet, country boy from Missouri who falls for Amy because of her wit, determination, and all the things that make her, her. They meet in NYC, fall in love, get married, and that’s when things start to go to shit. They both lose their jobs and Nick's mother is diagnosed with cancer, so they relocate (from a cute Brooklyn brownstone I'd consider kidnapping someone for) to Nick's hometown in Missouri (aka Nowhereville).

Things aren't going great, marriage isn't all it's cracked up to be, and on the morning of their five-year anniversary, Nick comes home to find Amy missing. Everyone is suspect, especially Nick who hasn't been winning any awesome-husband awards. As Amy's parents, Nick, the police, and the media start to investigate and delve deeper into Amy and Nick's personal lives, more and more is found out what kind of people they really are and if Amy is going to be found before it's too late.

NO SPOILERS I PROMISE. I'll keep it brief and stick the front end of the story. I had a BLAST reading this book. I thought it was so much fun, a perfect beach read, and yes, appropriate for talking about with your mom.

Gone Girl is divided into three parts, the first of which has a divided point of view. We have Nick's point of view (in the present) from the day he comes home to find Amy missing intercut with selected entries from Amy's diary (ranging from the day they met to her disappearance). Slowly we learn about Nick’s character, through his reaction to Amy’s disappearance and the police investigation. We also start to get pieces from Amy’s point of view, and learn more and more about how Nick and Amy meet and how their relationship has evolved and eventually dissipated over time. Flynn's style is really great, without losing her own authorial style she's able to switch pretty flawlessly from POV to POV. One minute we are really worried about Amy, who is just a girl who got married and is doing all she can to be the perfect wife. The next we're thinking, Nick is a shitty husband who has some dark secrets but not bad guy, we really hope that he’s not a murderer. It’s only as Nick investigates more and more, that we start to learn Amy’s dark secrets.

But the really great thing about this book is how quickly Flynn can switch all of that up. Even before Part 2 (if you start to lose steam, trust me just make it to Part 2), we see a character turn a surprising corner that really makes you reevaluate the character that you just started to understand. These switch-ups make it a really interesting reading experience, because it takes most of Part 2 and a lot of Part 3 just to adjust. Once you get to know someone (or THINK you get to know someone) it’s really hard to go back.

The characters, detail, and climactic buildup really drives this story, but I feel like Flynn loses some steam after the apex. Part 1 is really brilliant, but also the lengthiest section. It’s got some serious awesome character development, but I feel like we lose some of that once we move into the more action-packed Part 2 and Part 3. I would argue that the ending gets a bit glossed over, but I'm all about character development and putting the words where it matters so I liked it in the end anyways.

tl;dr
Gone Girl by Gillian Flynn is a mystery-horror thrill ride about a missing woman made interesting and compelling by excellent writing, structure, and characters. While it has its slow points, it is definitely recommended for vacations, the beach, and for my single ladies (and gents) out there who want proof of why rethinking marriage is a good idea.

review by casie
Posted by Book Jockeys at 8:37 PM