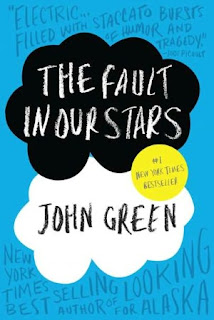 The first thing that you need to know about this book is that it’s a Cancer Kid Book. I know the genre fairly well- I went through this whole Lurlene McDaniel phase. I don’t want to talk about it. Anyway, the Fault in Our Stars is about a young girl who meets a young boy at a cancer support group. There is a whole lot of cancer in this book. It’s initially what made me not want to read about this book, but I am such a fan of John Green’s video blogs that I decided to give it a chance. (I should point out I haven’t read any other of John Green’s novels, so I have no idea how similar/dissimilar they are.)

Sixteen-year-old Hazel suffers from thyroid cancer, despite the fact that her tumors have been “miraculously” shrunken. She goes to a cancer support group where she meets super dreamy one-legged Augustus Waters. They become close and talk about life and death and books. In particular, one book called An Imperial Affliction by a reclusive author who lives in Amsterdam. Hazel and Augustus travel to Amsterdam to ask their favorite author questions, and get closer in the process.

The best part of The Fault in Our Stars is the writing. It’s funny and witty and incredibly sad. There are wonderfully written phrases and realizations as Hazel thinks about books and life and love. One of my favorite lines in the book is written by their favorite author: “Witness also that when we talk about literature, we do so in the present tense. When we speak of the dead, we are not so kind”.

The characters in the book are so much fun despite of all the sad going on around them. Hazel has familiar traits- watching endless hours of reality television, adoring and resenting her parents at the same time, crushing on and being confused by a cute boy, obsessing over a novel and what it means to her. Like so many kids I know, she integrates part of her favorite book into her life: quoting it, adapting its ideas, even dressing like the main character. Augustus is funny and flawed. Hazel’s parents are funny and kind but they are still frustratingly parents. Isaac, Augustus’s best friend, has his own illness, but he also has overwhelming teenaged angst that drives home the point that these are just teenagers. Sure, he has cancer, but his teenaged problems are no less painful. And this is one of Green’s strongest messages in this book: Cancer Kids are still kids. They’re still teenagers. They’re not magically wiser or deeper or “better” than other teenagers because they’re sick. They make mistakes, they say the wrong things, and sometimes they’re annoyingly angsty.

There are problems in this book. No matter how hard Green tries to avoid it, no matter how much Hazel calls out Cancer Kid Books, this remains a Cancer Kid Book. The plot is predictable and you can see the twists coming a mile away. It gets melodramatic, it gives you the same Cancer Kid Sad Moments. Despite this, despite knowing what I was getting into from the first time I read the bookflap, I still cried when those familiar punches were pulled. Green definitely faults in his attempts to reinvent the genre in his hip, ironic way, but the book still hurts.

This book makes mistakes. It has errors and flaws and it is by no means perfect. At the same time, neither are the kids in this book. Neither was the girl it was dedicated to, Esther Earl, a real-life teenaged friend of Green who had joy, angst, and cancer. This book is painful and it is hopeful and it makes a point to say that it is okay to be both things at once.

tl;dr
The Fault in Our Stars is a well-written and touching novel about being a teenager with cancer, but ultimately fails to surprise.

review by laura
Posted by Book Jockeys at 7:21 PM