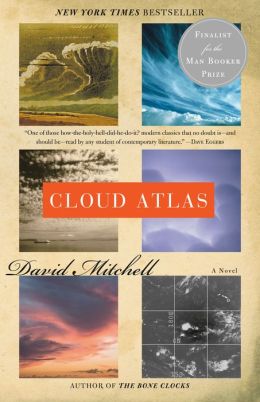 Let me start out by saying that I read this because of the movie. I SHOULD have read this years ago. But I didn't, so here I am with the rest of America falling prey to another book adaptation fad.

But let me also tell you that this is one of the best fads I've ever been swept up in. Reviewing this book is extremely ambitious feat, so really what I'm going to offer here is my heartfelt suggestion that it is something you should read as well. I've also seen the movie, and while it isn't the same, I can guarantee you that reading the book will 100 percent help you understand the movie better (whether you decide to like the movie or not) and that it may even change your understanding of the reading (Because it definitely made me rethink a few items. It was sort of like having a discussion with Wachowski Starship about their interpretation).

Cloud Atlas is a series of six stories about six different people in different places and in different times. Mitchell bravely goes forth to tackle this ambitious structure, creating six very different voices, lives, languages, settings, etc. Each story is reminiscent of a genre, there's the story of Luisa Rey, the classic small journalist vs. the "man," an evil corporation, there's Somni-451, the dystopian future where corporations are government, there's Zachry and the Valley, a post-apocalyptic world where radiation has destroyed the earth and humans once again rely on survival instinct and their faith.

Each main character has a peculiar comet-shaped birthmark that links them to their past-life. Each briefly comes into contact with their past lives, a forgotten diary, letters, a story, a recording, etc. and feels an attraction and familiarity to it, but clear recognition (a Proustian moment, if you will) to their past is never made. And I think that is the beauty of it. Each story builds on another. The stories of these different characters aren't the exact same person, but there's something in them, the same soul or the buildup of molecules, that makes them make the choices they do. Is it the revelations they've had in their past life? Perhaps. But I think Mitchell relies heavily on human nature and eternal recurrence. That everything happens over and over, that as humans we're all driven by these unseen forces, and that we are made up from the same stuff, like clouds that are reformed over and over again from the same water, just in different shapes, sizes, and at different times.

But I digress. I've probably confused any readers who haven't read the book yet. Mitchell does all of this without being pretentious, which is always the danger of the modern novelist. Mitchell admits to us that he isn't sure what to make of the six-story structure (that it could be brilliant or terribly cliched) through one of his characters, Robert Frobisher, a composer, who writes The Cloud Atlas Sextet:

"... a "sextet for overlapping soloists": piano, clarinet, 'cello, flute, oboe, and violin, each in its own language of key, scale, and color. In the first set, each solo is interrupted by its successor: in the second each interruption is recontinued, in order. Revolutionary or gimmicky? Shan't know until it's finished, and by then it'll be too late, but it's the first thing I think of when I wake, and the last thing I think of before I fall asleep..."

When I first read the book I felt a little let down, like somehow Mitchell failed to execute all the build up of these 6 stories. The organized person in me wanted everything to mesh perfectly, an "AHA" moment where everything made sense. It is left up to the reader to interpret the book as they understand it. Is it genius or a cop-out? Once again, left up to the reader. For me? It is refreshing. Mitchell hasn't tried to force anything down my throat, not really, and I'm free to talk about it on end and continually understand it differently, which I think is entirely the point.

tl;dr
Cloud Atlas is a marvelous, inventive, and imaginative read that will challenge, amuse, and definitely required reading to really understanding the Wachowski's Hollywood adaptation.

review by casie
Posted by Book Jockeys at 10:35 PM