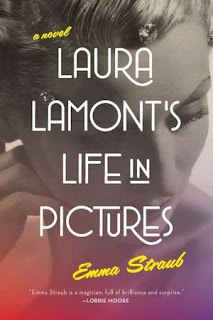 Laura Lamont’s Life in Pictures is a decent book, but it is just that- a decent book.  It’s not great or terrible.  Although I decided it was a good book, there are so few risks taken that it ultimately ends as a totally forgettable one as well.

I’ve been trying to write a review on Laura Lamont for a while now, but it was a disappointing read for me and I have been trying to find a way to word my disappointment.  It started with great promise with some beautiful writing about a little girl and her family’s small theater in a town called Door County in Wisconsin.  Laura begins the book as Elsa Emerson, a precocious child with two older sisters.  Her relationship to her sisters is easily the most interesting part of the novel.  Although I understand the purpose they serve in the novel, I wish the author had delved deeper into their relationships and how they shaped Laura’s life.  The beginning of the book is wonderfully written, with turns of phrase that gives us a perfect child’s voice.  I could have read an entire novel with this setting and with Elsa.

The book then travels with Laura as she makes her (new) name in Hollywood.  The book does include some fun golden age Hollywood characters, but they don’t last long enough to be truly entertaining.  There are actresses that are clearly based on some famous actresses- Laura’s best friend is a redheaded funnylady who makes a sitcom with her husband- but they don’t delve deep enough to be very interesting.  Laura’s husband and the love of her life is a bland, flat character whose only quality is that Laura loves him.

Additionally, the book promises to be about a fantastic and famous actress and her downfall.  It doesn’t really work like that.  Laura’s acting career isn’t nearly as impressive as the back of the book says, and her downfall is more of a slow amble into obscurity.  Maybe it is realistic, but it’s also boring.  It’s the last third of the book that truly disappoints. Although I understand that the author wanted to portray Laura’s whole life to mimic a true biography, it only serves to drag the narrative.  The book loses all its steam with her later life.

While Straub clearly has talent as a writer and the book beautifully written passages, it ultimately disappoints and, dare I say it, bores.